Kuro (クロ) is the sidekick of Toro in the Mainichi Issyo and Weekly Toro Station games. He has appeared in other titles as well, as the sidekick or as a series of NPCs. The 'main' Kuro is seen wearing a red bowtie; however, in mini games and other titles of the Doko Demo Issyo series, many copies of Kuro can be found as NPCs.

Kuro is portrayed often as being quite perverted, making flirts at female guests on Mainichi Issyo, and claiming he has no girly magazines in his satchel in Toro! Let's Party!(which hints he's lying.) He and Toro also share some amount of physical abuse between the two, though Kuro is more apt to dish out slaps to Toro than the other way around.

Kuro also is a leech; he was stealing Toro's paycheck and was probably the one who got Toro evicted, which lead to the change to Weekly Toro Station. Kuro could be seen in Mainichi Issyo now and then outside Toro's window, perhaps suggesting he is a stray cat.

He first appeared on the Playstation 2, and was given a profile on the official website along with the rest of the Doko Demo Issyo cast, later to become a mascot alongside Toro. Kuro and Toro also make an appearance in Street Fighter X Tekken (PS3 and Vita only) as playable characters. Toro utilizes Ryu's moveset, and Kuro uses Kazuya's moveset. Kuro also makes an appearence in the upcoming game, Playstation All Stars Battle Royale as an assist character in Toro's moveset. Kuro as well as Toro also appear in Hot Shots Golf: Out of Bounds. 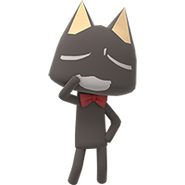 Add a photo to this gallery
Retrieved from "https://dokodemo.fandom.com/wiki/Kuro?oldid=4081"
Community content is available under CC-BY-SA unless otherwise noted.